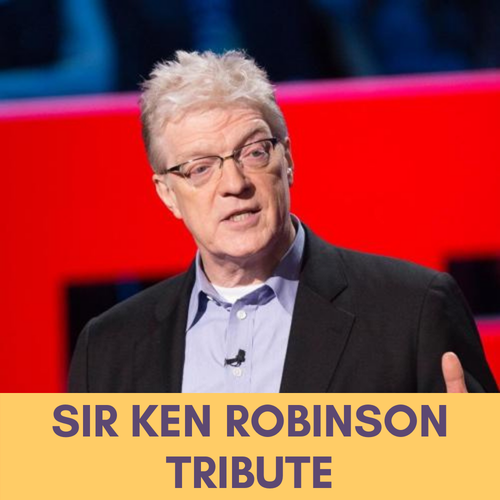 Author, speaker and international advisor on education in the arts (deceased)

Learning from Home: A New Series

Bring on the Learning Revolution

How to Escape Education's Death Valley

Sir Ken Robinson worked with governments, education systems, international agencies, global corporations and some of the world’s leading cultural organizations to unlock the creative energy of people and organizations. He led national and international projects on creative and cultural education in the UK, Europe, Asia and the United States.

For twelve years, he was professor of arts education at the University of Warwick in the UK and is now professor emeritus.  In 1999, he led a national commission on creativity, education and the economy for the UK Government. All Our Futures: Creativity, Culture and Education (The Robinson Report) was published to wide acclaim. He was the central figure in developing a strategy for creative and economic development as part of the Peace Process in Northern Ireland, working with the ministers for training, education enterprise and culture. The resulting blueprint for change, Unlocking Creativity, was adopted by politicians of all parties and by business, education and cultural leaders across the Province. He was one of four international advisors to the Singapore Government for its strategy to become the creative hub of Southeast Asia, and the guiding force in Oklahoma’s statewide strategy to cultivate creativity and innovation in culture, commerce and education.

Sir Ken was also involved in many wonderful organisations and charities, and was a Patron of the Lynne and Land Foundation, The Place, Think Equal, Earlyarts, The Institute of Imagination, DaDaFest, Everton Free School and Sixth Form College, Darcey Bussell’s DDMix and the Polka Theatre. He was a Board Member of MindUp and an Eden Project Ambassador.

His book The Element: How Finding Your Passion Changes Everything (Penguin/Viking, 2009) is a New York Times bestseller. It has been translated into 23 languages and has sold over a million copies worldwide. A 10th anniversary edition of his classic work on creativity and innovation, Out of Our Minds: Learning to be Creative was published in 2011. Finding Your Element: How to Discover Your Talents and Passions and Transform Your Life (Viking, 2013), also a New York Times bestseller, is the acclaimed companion to The Element, and provides readers with a practical guide to finding and developing their own talents and vocations. His subsequent book, Creative Schools: The Grassroots Revolution That’s Transforming Education (Viking, 2015), tackles the critical issue of how to transform the world’s troubled educational systems and is now available in 15 languages. Sir Ken’s latest book, You, Your Child, and School: Navigating Your Way to the Best Education (Viking, 2018) is an essential read for all parents to help get their children the education they really need for a happy and productive life.

A New York Times bestselling author, he led national and international projects on creative and cultural education across the world, unlocking and igniting the creative energy of people and organisations. Sir Ken was the most watched speaker in TED’s history, with his 2006 talk ‘Do Schools Kill Creativity?’ being viewed online over 60 million times and seen by an estimated 380 million people in 160 countries.

He was named as one of Time/Fortune/CNN’s ‘Principal Voices’; acclaimed by Fast Company magazine as one of ‘the world’s elite thinkers on creativity and innovation’ and ranked in the Thinkers50 list of the world’s top business thinkers. In 2003, he received a knighthood from Queen Elizabeth II for his services to the arts.